The TEC1 12706 40×40 mm Thermoelectric Cooler 6A Peltier Module is made of high-quality material. It is the simple application of the Peltier Thermoelectric Effect. The module features 127 semiconductor couples in the area of 40 x 40mm which very effectively cools and heats up to 90°C.

A thermoelectric cooler (TEC) module is a semiconductor-based electronic component that functions as a small heat pump. By applying the DC power source to a TEC, heat will be transferred from one side of the module to the other. It creates a cold and hot side. They are widely useful in industrial areas, for example, computer CPUs, CCDs, portable refrigerators, medical instruments, and so on.

This magical cells based on the Peltier effect are capable of generating electric power. The SP1848-27145 40x40mm Thermoelectric Power Generator TEG 120°C Peltier Module operates maximum up to 120°C which will give you different voltage and current outputs at different values of temperature.

After applying the heat on one side and cold on other side the device will start generating the voltage which depends upon the value of applied heat. The SP1848-27145 40x40mm Thermoelectric Power Generator TEG 120°C Peltier Module will generate the moderate amount of voltage with mA of current.

A Thermoelectric Generator (TEG) module is a semiconductor-based electronic component that functions as a small generator. 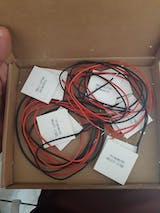 The units I received are exactly what I expected. No damage, nicely packaged.

Perfect for my little projects 😁

Works great plus they come in a ziplock bags so that they stay fresh until I need them.

One was chipped due to packaging, but otherwise all good.

My daughter's ordered for a school project.

It is great all peltier cells work!

The product is great. But, please don't send it in a bubble bag. Box it in the box,cardboard please and thank you.Bubble bags cause damage.

We’ve got a sweet discount just for your!
Subcribe to our wonderfull and occasional email to get a coupon code today!
Have fun shopping with us